I'm like you.  The things I care about are the things that hit close so typically- if it hasn't touched my life or the people's life that I love, I lack concern.

An example is Alzheimer's.  I'd heard about it, I knew my Grandfather died from it- but we weren't close and it had been years since I'd seen him so the affects of it didn't touch me. But, when my Mother-in-Law who I adored was diagnosed it became easy to care.  I read up on it, studied it, went to support group meetings, donated money, advocated and cared deeply about this disease that ultimately killed her.

Another is ALS.  I did the bucket challenge because I was challenged.   I knew the disease was terrible but what I knew about it was little- Buddy, the Cake Boss' momma was diagnosed on TLC, that was about as close at it hit home but I was happy to participate and help raise some money.  But I didn't really care, until my nephew was diagnosed and oh so quickly we see the affects of the disease. I care about ALS.

I could go on and on but you get the picture.  I'm not blasting anyone for not caring because the lack of concern isn't usually intentional.  It's a lack of awareness, of understanding.  Real caring is almost always personal in some way, isn't it? And if I don't understand, I can't really care.

So now when my youngest son is spirally downward and we're in round 2 of the fight for their lives, I get that some of the adults in their world don't care.  They don't understand how the diagnoses we deal with 24/7- 365 plus like Reactive Attachment Disorder, Sensory Processing Disorder, Post -Traumatic Stress Disorder, Mood Disorder, Depressive Disorder and others affect my children.

They don't care frankly- that sensory dis-regulation and defiance look very much the same- but are not.  They don't understand that what they say and how they support my boys requires more effort that simply punishing them.

They don't care that when my son looks them in the eye and speaks truth- he may not understand why that truth may not always be appropriate.

They don't care that when he is so overwhelmed with what he doesn't understand to the point of shutting down- it isn't easily solved by simply telling him to sit up and pay attention.

And they don't care that what he was successful in on Tuesday may not be duplicated on a Thursday. "I know he can because he did" doesn't work.

I get that you may be thinking already- oh, just another parent making excuses for their child's behavior instead of fixing them.  We're used to that- it's a lack of care/understanding and that's okay.

Did you know what sensory processing disorder is? Have you ever heard of it.  If you want to understand, read about it  here.  Nicole does a great job explaining it in her blog. She did a whole series, that's really good.

I'm not making excuses.  It's not my job to "fix" them.  I am no longer looking for validation from the world.  God called us to love our sons unconditionally.  To understand their differences and to trust Him to heal them to the extent He had planned before he carefully created them and knitted them together in Momma T's womb.  I so wish I had been able to birth them.  To love them from conception to delivery- to give them the same start we gave Shayne.  But understanding and accepting that it's simply different- is what helped me to care.

And then there are the meetings.  Like Thursday's when I walked in not realizing exactly what a big deal this meeting really was.  And as I sat in that tiny conference room where I've spent so much time- now surrounded by stern faces and strangers with opinions and listened to the words they are saying about my son the air literally was sucked out of the room and I could no longer catch my breath.  I tried to tell them they're wrong.  They need to look at all of my son, not just a 30 minute time slot in which he was overloaded- the signs we've discussed over and over again ignored.  They don't understand him. So I sat like a target with fistsful of their words coming at me like a boxer practicing for the ring- and the blows hurt like Hell- and I can't run because I do care.  The monster they are describing is my little boy.  The one that climbs in my lap and cries because he hurts and don't know why.  The child that can try unsuccessfully to sleep for hours and hours but not until he climbs in my bed that he's out in minutes, because we- not the world is his safe place.  And in his words, he is no longer alone.  And with each blow I realize my son needs more and deserves more that he can get in this environment that doesn't yet care.

It isn't because the teachers aren't wonderful- this isn't a teacher/public school bashing.  It's a reality that what my boys need and so many others hasn't yet touched the lives of the adults they're in the charge of and we don't care about what we don't understand.

I'm not mad about it anymore- I'm sad.

I'm sad because his Daddy and I know there has to be a better way but we don't know what it is or how to get there.  So I'll go to school on Tuesday morning, when my suspended son is allowed back, the son who doesn't quiet understand what all the excitement is over; and I'll listen as they tell me who they think he is and I'll advocate and argue and try to get them to care.

And while we continue to support their needs through counseling and medication and unconditional love and boundaries and educating both of them on what's okay and what isn't we're praying and asking God to make a way where there seems to be no way.

We're celebrating the Tuesday's because we know how hard it was for them to get there and praying for more of them, while understanding there is joy to be found in the one.

If you're reading this, we're asking you to pray and care too.  But we know, the truth is that if you're here you already do in some form because you're part of our lives.  You've been touched but maybe you don't fully understand.  So care enough to trust us to know our children better than anyone else. To know that when we say it's been rough, it has been.  And when we say we need your prayers, we're desperate for them.

And care enough to learn about what makes it different and help advocate not just for my sons but for all the kids you come in contact with.  If you're a teacher, you have the power to invest in and change a child's life by simply letting them be the square peg and being okay with that.  By not taking their truthful statements personally.  If you're a Sunday School teacher, recognize that the kid drumming the pencil might not be trying to distract, but that's how he actually listens.  Make it okay for some of the kids to stand up during story time.  If you're the crazy aunt or favorite cousin- don't avoid  the kids you have your holiday dinner with  if they are extra loud or hyper.  It's okay to ask questions. Try to understand if they need to crouch in a corner and lose themselves in a book or draw for hours, or bury their nose in a game that they might just be trying to survive the overload of noises and smells that's stirs their insides to ache instead of just being rude.

This isn't an all about us post. I see you Momma's and Daddy's fighting the same battles. I see the fatigue in your faces and you too just keep showing up- hoping that somebody will finally get your kid.  And invite them to the party.  To not walk away when they see them coming because they might require extra grace or time.  To hug them and love them and tell them they see the good things instead of just focusing on the negative.

Rex and I have spent too much time reacting to what people think they know about our kids. 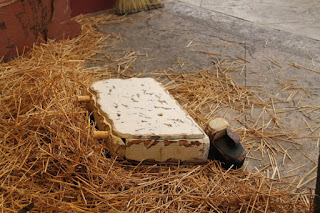 Our boys are as valuable to God as me and you- and I'm tired of being shamed with every call to the Principal's office, every glare from a stranger in a restaurant, every time the tapes in my head tell me I'm doing it wrong because I can't fix them.

And to you who care, oh we know who you are and we treasure you.  You'll never know how you simply loving our boys encourages us.  Telling us they had a good day, their smile is contagious, that they made you laugh, they helped another child, they simply participated today- we need to hear the good stuff too and you provide it.  When you keep inviting us and our kids to dinner or you agree to watch them for us, knowing it might be exhausting.  When you ask us how we are and are really okay with our answer- good or bad means the world to us.
We have some awesome cheerleaders!  Go Team! The fact that you accept our family and choose to care- priceless.  And I know God will bless you for it. As you've done unto the least of these applies to you too!

So what do we do now?

We pray. Pray for clear direction and for mountains to be moved so our son's can be successful and happy and free to be who God created them to be.

Got faith?  It only takes a mustard seed size.  Pray with us team, we need you.