It was a little over a month ago- that call from the school.  It was Nurse Kim.

His jaw is what?  Is quivering?  Are you sure he isn't doing this on purpose.  Blue streak? Really.  Is it a seizure?  Ok, I'm on my way.

I called Rex to let him know we were kind of in an emergency- we didn't know what was wrong, just that something was.  Rex picked Elijah up and we met at the doctor. It was supposed to be our first normal day back at school, me back at the office for a full day- no appointments, meetings, or suspensions.  (insert hysterical laughter here)

I didn't understand the jaw quivering until I saw it.  The blue streak across his lip and swollen face was alarming.  After a few hours of uncontrollable jaw spasm and a hefty shot of Benadryl we went home thinking we had headed off a severe allergic reaction to a medication with instructions to follow up with his psychiatrist in order to safely taper off the assumed offender.

It wasn't that simple.

Within 24 hours we were at the Emergency Department in respiratory distress, full on panic attack and the seizure like symptoms.  The next several days would include multiple late night conversations with the on-call docs, daytime office visits and another ED visit.

During one of the office visits, the doctor asked if anyone had explained this to me- then she went on to explain that the initial diagnosis- severe allergic reaction was actually Dystonic Reaction.

Dystoniwhat?
"You can google it- there is tons of information on it" she said.

Basically, Elijah's body was going on strike against the anti-psychotic meds he was taking.

We started by removing one medication and then another.  But the seizure mimicking symptoms were increasing.  It would start with "Mom, Mom.... I don't feel good" followed by his jaw spasm and then everything from trouble breathing, inability to use or move his arms, unresponsive for several minutes, severe pain in his hips and legs, rigidity in his legs, panic attack, swelling face and throat, headache, dizziness, nausea, blurred vision, and more.   I was also advised that it can sometimes be permanent which got our attention- and our push to stop the medications. 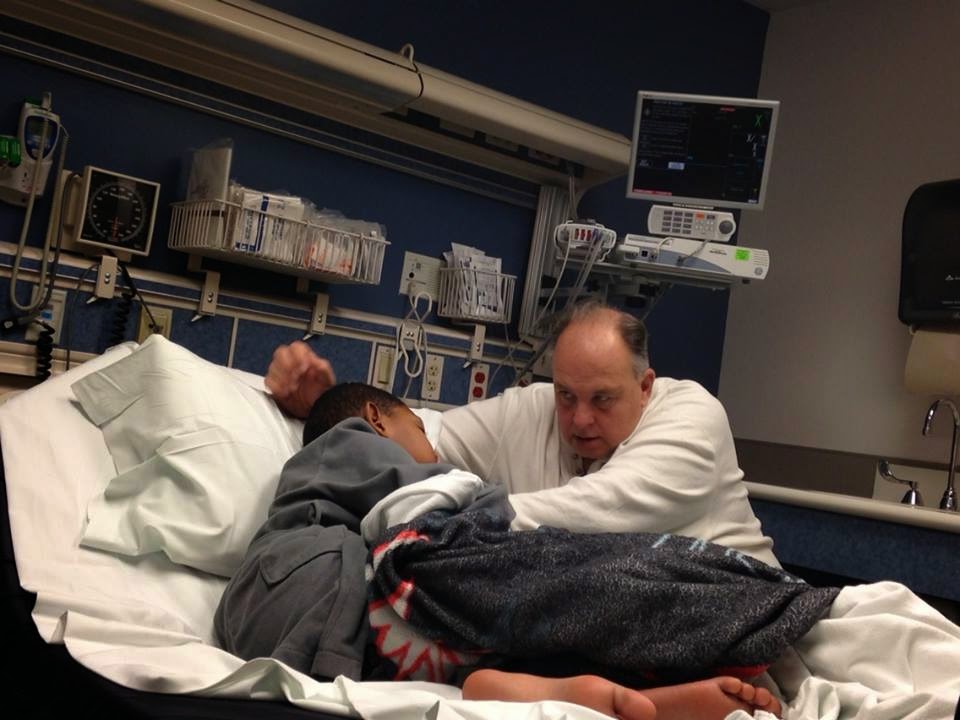 But, instead of that,  we were getting push back from the ED who seemed to base their diagnosis on his history and not his symptoms- suggesting, because of his history that this child who is terrified of going back into residential-could be doing all this on purpose so he would have to visit the hospital.  Really?

Try to chatter your teeth in perfect rhythm too fast to see on video for three hours straight- when you can successfully mimic that then I might entertain your thought that this for kicks and giggles.

I'm so thankful for his family physician- who in reading the reports from the ED for Elijah immediately called to check on him, and then tell me that he did NOT agree with their suggestion and that he was certain this was an allergic reaction to his meds, it was real and was painful for him and for me to stop another of the medication until we could get in to see his psychiatrist the next day- who also agreed, and took Elijah off all but one of his meds.

"You're not going to like me" he said- since we would be tapering him off during Christmas break.  Good timing for school- poor timing for Mom. 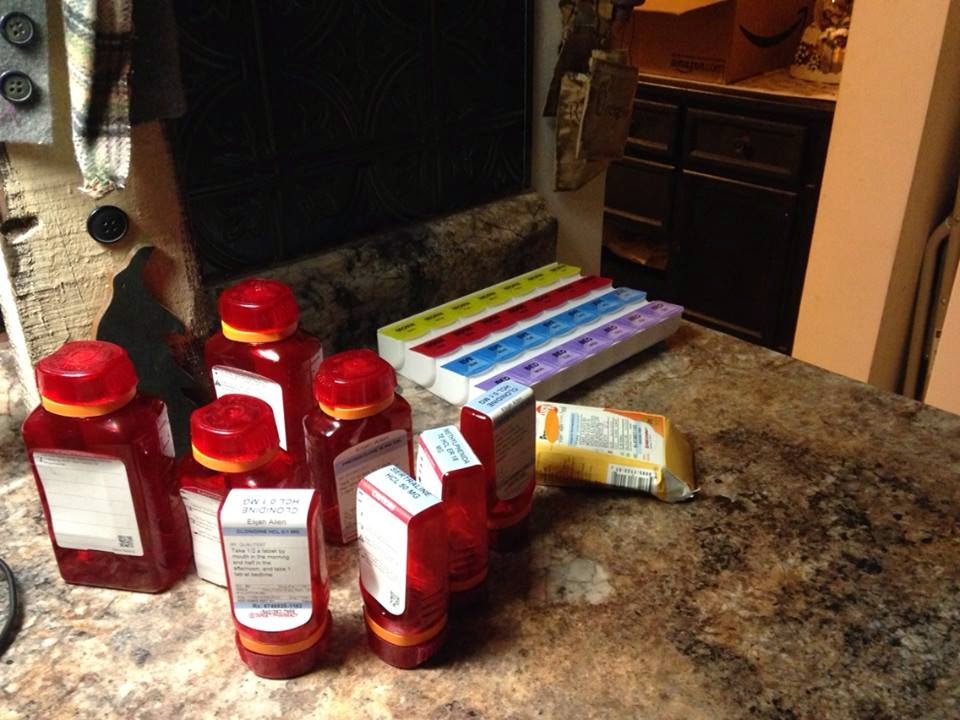 After being concerned about the hefty doses of meds and the scary physical affects I watched his body go through, I was ready.
Besides, Rex and I know that living with a RAD kid meant the holidays would be at best full of challenges so what's another one?

Within a few days  of coming off the meds the seizure-like symptoms started to diminish and eventually over the next several weeks went away.  I stopped hearing him call out "Mom, Mom" which always accompanied  a distinct look of terror in his eyes.

We've had some tough days and even Elijah has been asking begging for his meds back.  He can tell a difference when he is off of them and in his words, "it's too hard" without them, and he wants it to be like it was when "I came home" (from Fresh Start) "when things were good".

I remember when we first agreed to give our then 6 year old prescribed medication.  It wasn't a quick decision and one of the first we felt we had to defend; but when your young child is telling you how he will kill himself and why he wants to, you can't ignore the depression and pretend it isn't real.

We went yesterday to see the psychiatrist after I requested we move the appointment up a few weeks.  We do see him struggling and we don't want him to lose the ground he worked very hard to cover while in residential.

Thankfully, we're not going back on the anti-psychotic meds just yet. But I'm happy that he's starting a new depression medication that should also help him with his anger, mood and frustration.  We'll see how it goes and I'm hopeful we won't need the hefty drugs for a long time, if ever again.

We're watching closely for allergic reactions- it could go either way.

Many of us who experience depression and anxiety struggle with saying it out loud.  We fight against taking medications for an illness that hides so well behind our masks of "I'm fine."

After seeing the benefits of the medications personally and through my family, I'm not afraid of them like I once was.  We have to work together to remove the stigma that accompanies mental illness medications.  You're not alone. 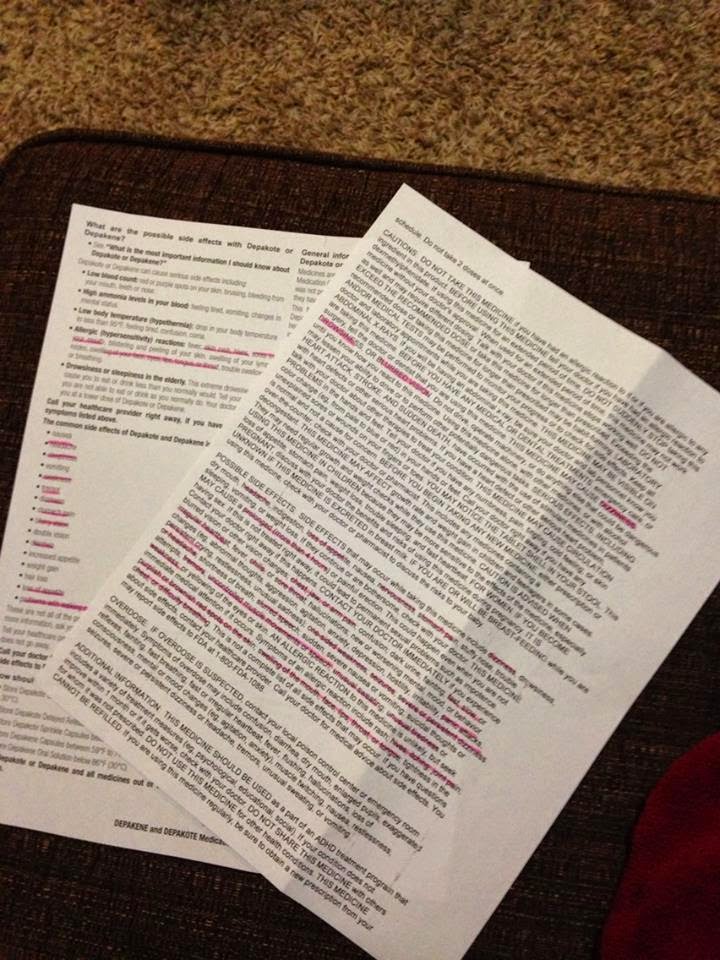 If you're struggling with depression or mental illness, be encouraged that there are medications available to help make things "easier".  Just be aware of the potential side affects, read the fact sheets that come with the prescriptions and pay attention to your body.