We got a new car in December- we were ecstatic.

We hadn't planned on getting another one any time soon- but after the second family car bit the dust Sunday our plans changed.  Especially, since said dust-biting car is Shayne's and he lives in NC.  And is a full-time student.  And I want to see him on weekends as often as possible.  And he needs a car to go to work.  And drive home to see his Momma.  So, his dead, needs more dollars invested than it's worth car had to replaced.  The plan - Momma gets a new-er car and we'd share the Taurus with Shayne. This made him very happy (wink, wink) but always grateful he played along.

Now, we didn't have thousands saved up to pay cash for any car so we sought out our favorite dealership looking for a deal.

Dave Ramsey would probably flunk us out of Financial Peace but it is what it is. And what it is at the end of the day- was trading in the Taurus and leaving with two new cars with better rates and payments.  Sweeet! and a little crazy, but mostly Sweeet!

The thing about three much newer vehicles is the key fobs.  Similar yet different each slightly different features. 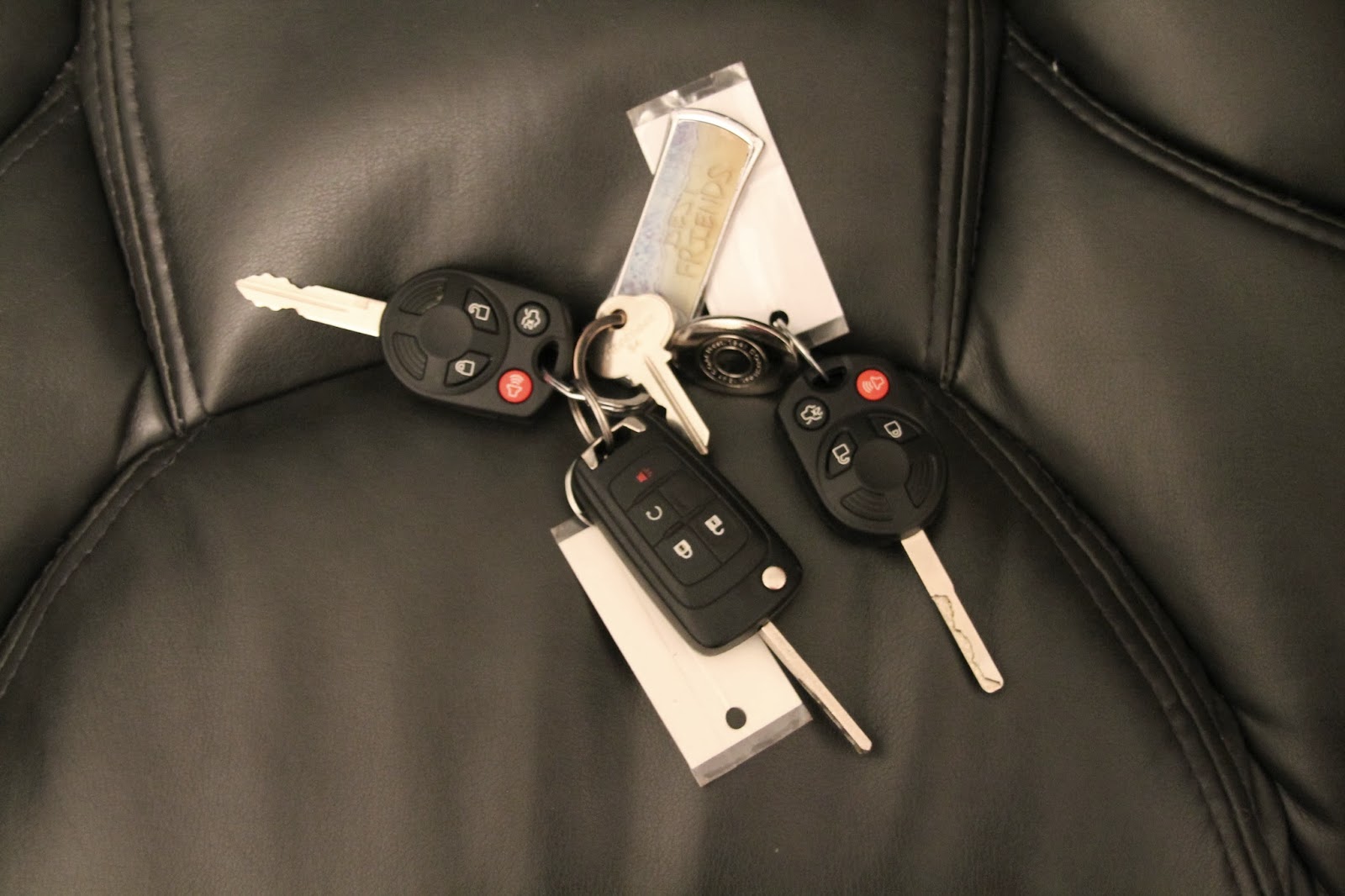 Having three different vehicles all of a sudden can be a little confusing- I've been reading owner's manuals at the stop-lights so I was pretty excited today when I realized my new to me Equinox has auto-start.  Our van had it and in these single digit temps, I've been missing that feature.  I was ready to try it out this afternoon and got my first opportunity after running into JCPenney's before meeting Rex for dinner.  I came out with my new car parked right near the entrance- and started testing out the auto-start.  I kept hitting the buttons but the lights weren't coming on and it wasn't starting.  Maybe I was using the wrong key fob.  So I tried them all.  Nothing.  But I kept trying and was getting mad figuring the dealership gave us a key fob with a low battery.  I continued walking toward my new car that in the dark seemed to be glistening like a diamond underneath the street light.  Why won't these buttons work? I tried one more time as I reached the car, still nothing.

I opened the door- and about the time I noticed an odd odor and a lot of newspapers I was greeted with a "hello" from a rather large man sitting in my drivers seat.
I screamed.
He jumped.
And I realized it wasn't my drivers seat.  It was his.

I tried to explain that I just got a new car last night and it looks just like his- while trying not to show how utterly embarrassed I was - everything in my skin was still shaking from the shock of this man in what I thought was my car.

The phrase "you scared the pee out of me" apparently is true.

He was sweet as he could be when he smiled and said- "It's okay- it's okay- but I think your car is two down, I've been watching your lights flash on and off for several minutes now."

I apologized one more time, thanked him for his kindness and removed myself from the driver side door of his car so he could go back to Tuesday Night Live.

And just as he thought, my car was two down and how happy I was to find the engine running.

I do love me some auto-start.