Plans Change, Dreams Not so Much.

That wasn't the plan when I enrolled him in Kindergarten.

Shayne proposed to Kayla in April.  She said yes.
In September, she changed her mind and broke the engagement.

Shayne's plan for his future has changed a lot in the last few years. Poor kid, we've bounced him from school district to district, private school, public school and finally home school.  He handled each change as well as any kid could.  But he's had a dream since he was six years old that no matter how his plan's may have changed, that dream followed.  A dream he has shared with most anybody who'd listen to him.  A dream that even when I thought I might have changed his mind on pursuing, always came back within hours or days. 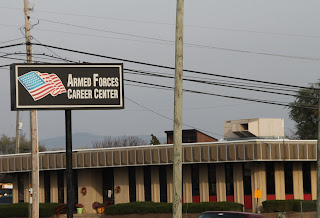 His dream, to serve his country in the United States Marines.

Plans have changed but his dream, not so much.

So, Friday after we celebrated his graduation with his favorite hot wings from Applebees and a game of Putt-Putt, his Daddy and I went with him to meet the recruiter for the USMC and we signed some pretty important papers. 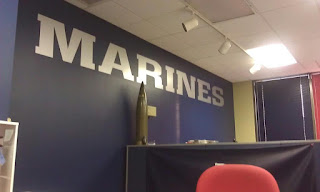 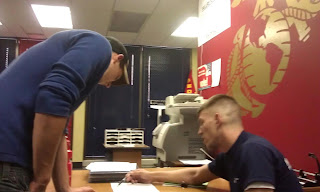 I can't even describe how I'm feeling.
Maybe the words will come over the next few months as I prepare to send him off to take his place on those yellow footprints.

Don't be confused by my tears.  This Momma is proud of a baby boy that is turning into quiet a man- a little earlier than any of us would have planned it.