Our big move in July meant Isaiah would be going to a new school.  I was nervous because if you know us, you know that school has been anything but roses for my boys.

His mid-term report tells the story that he is doing well, so far.
Mostly green days, a couple of "think about it" days. There was that broken pencil incident. 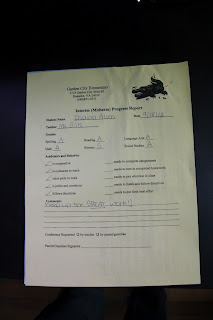 Back to School night was a bit telling.  That's when I really knew things were different here. I admit I was distracted during the PTA presentation.  I could only read half of the PTA's VP's t-shirt,
"I'm a bad..."
yep, that's what I was thinking too.  I filled in the blank with all sorts of options, and was relieved when she turned and I could see the shirt read "I'm a bad girl."
hmmmm, intersting choice.
We were happy to visibly see the dedication of the teachers and their genuine love for the kids as we walked around meeting teachers and checking out the school.  The environment is one of relaxed caring.

We hadn't planned for Elijah to go back to public school anytime soon. I was enjoying getting through my work day without that phone number popping up.  Watching him learn stress free= good times.
Did you catch the word "planned"
I should've known.

Without going into the details (they'll come later) of why his fave homeschool teacher is no longer educating America's youth- it became clear that his going back to school sooner rather than later would be the best thing for him.  So, we took the same leap of faith needed to pull him out of school, to enrolled him back in public school.  Sigh.

His first day was this past Monday.  He was so excited but also guarded and nervous.  My heart was beating fast and my stomach knotted as I walked him into the school. I felt a little like I was feeding my son to the wolves.  Just the thought of teachers and principals and phone calls and notes and meetings and more of the Red, Green, Yellow made my stomach hurt.

Have I told you I hate the negativity of the red, yellow green system.

I walked him to his classroom and left him in the good hands of Mr.Wilburn and I started counting down the hours.

and then almost like clockwork,  after bragging to my buddy Leahanne this morning that we'd made it 3 days without a phone call- the strange number ringed in.

It was his teacher calling and he had left a nice message; but when I heard that he wanted me to call him back, I prepared myself for the worse.

Mr. W. answered the phone and proceeded to rock my world.  Oh, he wasn't exasperated or telling me he had never had a kid like mine, or begging me to fix him.

His call was for another purpose.

He wanted to brag.  On my kid.   Elijah is doing great!  He is listening, raising his hand and following directions.  He's settling in nicely and has even made some friends.  Not sure about their influence just yet, his first brush with trouble was because he even listened to his friend when he told him to tie his shoe laces together-.  Ok, we'll work on that one, but Mr. W. wasn't freaked out by it- he told me Elijah is in the top 10 for good behavior.

Halelujah.  Do you hear angels singing?

I thanked him for his call and told him how much I appreciated it. Oh, we both know it won't be our last conversation but that's okay.

How exciting for this momma to hear in detail how my sweet mess is making strides and doing great.  Teachers, share the good news too.  We momma's need to hear it. 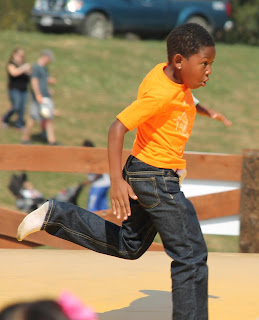 HOPE.
It's a beautiful thing.

And that oldest kid of mine, his school is nearly done and he is very close to graduating.  That's all I got to say 'bout that right now.