When I married him I thought 50 was old.  I guess it depends on which side you view it from.  As I thought about and prepared for his big day, I knew it had to include his family and friends.  My husband loves. treasures. adores. lives and breathes. for the people in his life.  I also knew I wanted the day to be memorable.

So the planning began.  Most of it, took place in a hospital room with Brenda throwing ideas and me writing them down so I didn't forget a detail.  That happens when you start nearing the big birthdays.

And, after weeks of research, phone calls and comparing- I settled on a custom made, three-tier Topsy-turvy cake with white, black, silver & a touch of teal.  The cake lady got it- I didn't want a white cake/white icing grocery store cake.

The lies began.  The plotting and the scheming.  The excitement.  The RSVPs came rolling in.  Yep, that's a lie- the RSVPs trickled like a nagging faucet.  The plan was coming together.

I spent hours looking for pictures to use against him tell the story of his life. And my heart swelled bigger than a tick filled up.  Every picture told a story.  About his love of family.  And friends.  And all the kids he once held like a sack of taters who are now growd up and moving on with their own stories.  And I felt like the gift was mine.
I won't lie (anymore) the stress was mounting- it's hard work keeping secrets from the love of your life.   Especially when our beloved Floridian called and hinted of a weekend party.  Thank goodness for my quick thinking sin-nature kicking in and more lies.  I'm not proud of this. Really.  I don't suggest it, unless there is a red velvet custom made birthday cake involved.

My brother and his family drove from Knoxville, TN to remind my husband he's getting old.

The big-day arrived.
Rex was working so I was free to run errands, decorate and prepare to receive the cake.

Oh the cake.  That's where things went south.  The cake lady arrived.  I got giddy.  She, not so much.  Teri reminded me to stay calm.  The cake lady's face was not a happy one.  I went to view the "blob in the back of her car" that was once the beautiful cake intended for my beloved.  It wasn't pretty people.  It appeared as if the professional cake baker didn't understand transportation of 3 tier cakes needed support.  And a clean surface on which to ride.  She left without any concern for my dilemna.

4 hours before blast-off- I had NO cake.
I'm not bitter.
Maybe a little.

Thankful for my team of family and friends who started making phone calls, we just in the nick of time had a replacement.  You guessed it--- the everyday white cake white icing from the grocery store. 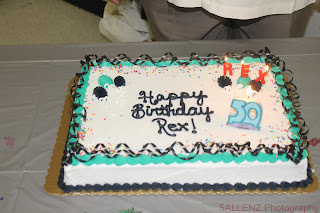 And right on time, the people who mean the world to us began pouring in and it seemed the plan to get him to the Charles R. Hill Senior Center worked perfectly.  He didn't suspect  until he recognized some of the "hidden" cars parked at the back entrance.


Thanks to every one of you who made his day special, and helped me in all the lying and sneaking around.  Aren't y'all glad we're already forgiven.

With all the commotion and busyness of the weekend, we spent the official birthday today doing normal life things, like eating spaghetti with the Nance's.  I did make sure he had red velvet today, thanks to Coldstone Creamery.  It's his fave, you know. 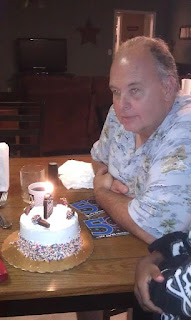 Shayne Allen- we sure did miss you tonight.
And to you, Mr. Rex Allen, growing old with you is my honor and pleasure. 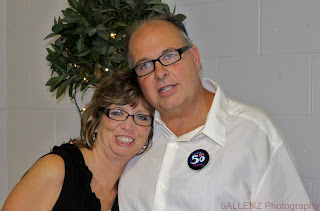 Happy 50th Birthday to my own Tinky Tunkey.
Loving you always,