When the Journey Takes a Different Path- Make Sure You've Got your Sensible PJ's on.

The last few weeks have brought big changes for the Allen's.  I've been overwhelmed with emotions and frankly, too exhausted to gather all that our family is feeling by putting fingers to keyboard in fear of completely falling apart.  It's time to let if flow so be warned, this one is a long one people.
The Monday morning phone call from home when you're on vacation is never a good thing.   We decided to stay, but our cell phone bill proved where our hearts and minds were.  Home.  Iris. Alzheimer's.  24/7 care.  Safety. Decisions. Change.

We came home a day early so we could spend Sunday with her. We wondered how things could change that fast?  I spent that Sunday night with her- which prompted The Green Bathtub  post.  As the weeks followed and we spent more and more time together, it became clear that things would never be the same again.

I had to be strong for her.  She didn't know I would sneak off to breathe in deep and let tears fall.

I thought I understood Alzheimer's and dementia; after all I watch Grey's Anatomy.  I realize now, that this is one of those things you can't possibly understand, until you are living it.  Up close and personal.  And now that we are, I realize I've failed many of my friends who their own journey took them down this path before ours.

Friday night became girls night  and even knowing I wouldn't get to sleep much, I quickly began looking forward to having her all to myself.  I'd curl up next to her in her bed and we'd chat.  As the weeks passed, so did her memories of our nights together.   I knew these times were precious, it didn't matter they were hard.

Our visits became more and more difficult for me to keep it together.  This strong, determined, independent and stubborn woman seemed to be MIA.  In her place a confused and seemingly lost frail person taking over.  I learned to read her eyes.

The Sunday afternoon that she asked me if I knew Rex, and then proceeded to tell me about him and his family in great detail- that was the day I knew the hard decision recently made was the right decision.  Her life's journey was taking a different path.

With the decision now made- she had to be told.  People have asked us why we (the daughter-in-laws) chose to tell her.  That's easy- because we adore her sons, and watching them bear the pain of what was to be, and what was no longer to be,  was too much for us to ask them to carry that memory.  It was a gift we could give them - allowing them to be her boys.  If she was to be angry- we wanted her to direct that anger to us, and not to her sons.

We told her exactly one week before the move- and what a week that turned out to be. We repeated the what and the why and the when daily. We second guessed the decision and continued to search for another way, all the time knowing that this was the right option.

We started her last weekend on Buena Vista around 5 am Saturday morning- when I realized she was packing.  I knew in her eyes, this trip "home" would be like none other.  Taking the advice we'd been given, I joined her on her journey.  We packed up plungers and curlers and empty picture frames so she could go "home". This is where the sensible pj's come in people, we were moving fast and trotting around town in lingerie wouldn't have worked too well.  I will not judge people in public sporting pajama bottoms again, they might just be taking somebody they love home.  I left her with my brother and sister-in-law and hurried to my car. I needed to talk to my best.  I needed to release all I'd been holding in.

Hyperventilating 40+woman in PJ's driving through Hardees for Diet Coke early on a Saturday morning is not a pretty site.

Looking back on that morning, I know God was answering specific prayers- her willingness to leave the house gave us the chance to prepare for the move coming in three more days.

Sunday, May 6 we celebrated her 90th birthday.  It was a good day for her filled with family and friends dropping by to show their love for her; but for us, it was a roller-coaster of emotions.  We smiled but inside we knew this would be the last time we'd celebrate with her in the house people had been gathering in for 50 years.

Her life's journey was taking a different path - things will never be the same. 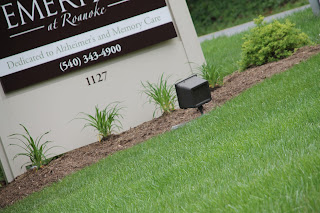 Monday, we moved the things we had gathered on Saturday into her new place.  It was the first time I saw her room, her neighbors, the setting.   90 years of life now condensed into a few boxes.

Alzheimer's is cruel.  I wept.

Her three best girls stayed with her that night.  It was the sweetest, saddest 24 hours of my life.   We ate pizza at 9:30 pm, and told stories about our men.  We danced in the kitchen to Old Dog.
YES, grandma danced and we each took a twirl with her.  We exchanged looks.  The look that said this is fun, and it sucks, and I'm here for you but I wish this wasn't happening look.  Just when we thought she was settling for the night, she opened up.  We talked until midnight, and we answered her difficult questions, again, and again, and again.

I wouldn't trade that night with "the girls" for anything- except maybe for her to be her again.

The morning came with an eery sense of dread.  It was as if nobody wanted to move knowing that would trigger the beginning of the worst day of our lives.

We ate  Ona's omelets and drank coffee.  Grandma did the dishes.  And we cried.
We sat on the couch and eye to eye and for the first time I cried with her.  No apologies, no holding back.  Just crying together.

And then it was time to go.  Using the advice of my sweet friend, just put one foot in front of the other, one step at a time we left Buena Vista, together.  The day was long and hard and overwhelming.  And after spending several hours together getting her settled we left.
Without her.

I wouldn't have thought this could be worse than death. We agreed, for us it is.

We left her with strangers who promise to care for her better than we can.  We left her with doctors, and nurses, and educators and homemakers, and teachers who, just like her no longer remember who they are, how old they are, and even where they are.  They may or may not know their own kids when they walk in, that they had birthday cake the night before or what day it is.

Alzheimer's doesn't discriminate.  And in our family we're afraid if we can't find some humor, it might crush us under it's weight.

So,  we chuckle when Mrs. A.D. asked us about 27 times where Elijah goes to school, and the other Mrs. A., when asked her age declares... "I don't know" or when Mr. B. tells me "you've got pretty legs" or when introducing ourselves as we normally do ask the beautiful piano player her name and she can't remember it, or when Isaiah comments after a minor altercation in the courtyard involving my camera - "that lady don't listen too good". 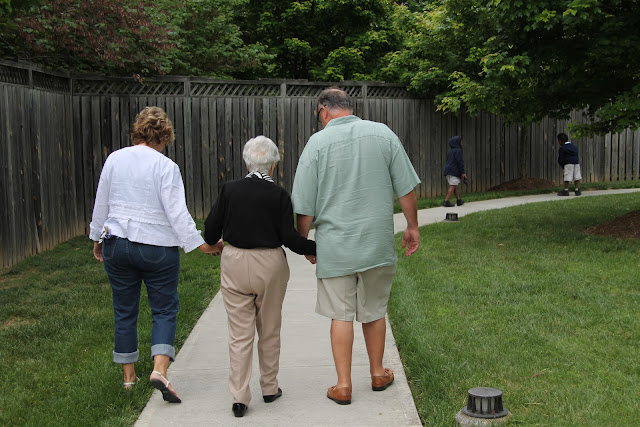 But what matters most is that we are still walking it together.  We'll keep trusting God to handle the why.  I think I'll take Him at His word, and toss this burden back His way... it's too much for me.

I Peter 5:7
Give all your worries and cares to God, for he cares about what happens to you.

Has your family walked the Alzheimer's journey?  I'd love to hear your comments and suggestions.