When we first got married we lived with Rex's parents for a while.  A couple of times.
We moved into their house, that they moved into when Rex was a baby.  There was one bathroom at the time.   There was a shower, but nobody was allowed to use it.  The word was- it leaked.

Getting ready for work in the mornings- a bath in the green tub was part of my routine.  Only a little bit of water- never did I fill it all the way up- that would be wasteful.
I'd sit in the tub and listen to life happening on the other side of the door.

Each morning they'd sit at the table and sip their coffee. I was jealous.
I wanted to sit and sip with them.  I didn't want to go to work.

It has been years since I took a bath in the green tub.

Until Monday morning
when I got ready for work.

I had spent the night with my sweet mom-in-law to help keep her safe.  Her Alzheimer's is progressing rapidly so we are going to have some "girl only" sleep overs.

As I filled the tub with water I was filled with emotions. Memories flooded over me just as the water did.

I was back in the place where my love for her began.  In her house where people gather and sit.  And eat.  She'd always say- "make out your supper best you can.  I don't have much to throw together" and she lay out a spread we'd ascend on like vultures.

Her not much was usually a roast beef, mashed taters, cole slaw, cucumbers and onions soaked in vinegar, sliced bread with butter and that was just the basics.

She is known for her homemade rolls and potato salad.  Don't tell her but they aren't my favorites.  My favorites are the creamed Lima beans- Ford hook small- and her creamed peas.  Neither of which I would have ever touched before they appeared time and time again on her table.  Call it curiousity, but one bite of that sweet sauce and I was hooked. She taught me how to get the cream sauce just right.

I sat in that silly green tub and realized I'll never have her creamed Lima's again.  I'm certain my laundry is safe.

I sat there and listened for life happening on the other side of the door. No longer two sipping coffee at the kitchen table.  Just one.

One, who a few times durng the night had told me with her eyes that something was wrong.
I wondered if she'd be scared if she walked in and found me there, not remembering who I am or why I was in her house?

I thought about a lot of things- all at once.

Like the best advice she ever lived out before us

"just got to 'cept them the way they are"

her acceptance of people is most likely why her house has been the gathering place for more than half a century.
I thought about
silly things.
happy things.
sad things.
scary new things.

We'd had a pretty busy night so I hurried to finish up before she got up, again.
And yes, I made sure to wipe the tub shiny clean just like I know she likes it. 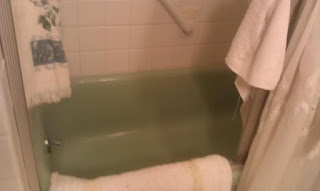