Shayne works at Camp Eagle.  Every Sunday night, I drive him back to Fincastle and drop him off in the woods.  Nearing the end of our second summer, I usually leave him there and then drive home with just  my imagination about what his world Sunday - Friday looks like.  I've seen brochures, and a few pictures, but mostly it was his private place.

I love to hear him talk about his experiences at camp, especially how God is revealing Himself to him.  So when he wanted to go back early tonight, to put out his special night vision deer wildlife something camera, I was happy to oblige.

He works really, really hard at camp and the pay, well, it's ministry pay.  But the perks like learning skills and discovering and loving the great outdoors is priceless.  When we left home tonight, I grabbed my camera to take a promised picture for my Daddy of the deck Shayne's been building. I planned to grab a few shots, and blog about how proud I am of him and his carpentry skills.

Everything changed when we parked the car, I  hopped out for our weekly goodbye hug and he started up the hill.  But he stopped and asked ..

Duh!  What mom of a teenage son says no to a question like that.  I quickly (well, as quick as a mom in dressy sandals makes it up a dirt trail) caught up to him, and started snapping pictures as we walked together up the dirt trail to his cabin.  He showed me a couple of his drawings and as he grabbed that special night vision deer wildlife something camera asked again

I thought for a second, because I knew this walk involved unknown territory.  I asked how "dangerous" the trails were, he kind of laughed and said "you'll be fine" even in my pretty black sandals.  So, again I seized this opportunity and followed my son, as he led me on an adventure I'll never forget.  I kept snapping pictures along the way as my intended story about Camp Eagle took on a brand new life.

The pictures below only tell part of the story.  I wish you could hear his words-----what a gift to listen as he came to life in these woods.  I was amazed at his knowledge, and love for God's creation.  I laughed as he assured me if we saw a snake he'd kill it with his bear hands to protect me; this tough young man who was then a little freaked out by the spider webs.   He showed me Big Cedar, WidowMaker and walked me up Suicide hill.  And how could I not love this son as he piggy-backed me through the mud, assuring me I wasn't any heavier than the campers.   SCORE!

We eventually did find a snake while touring the much heard about  "sewage plant" The picture is his, not mine.  He was not afraid to get close up and way too personal with his "friend" and then bravely blocked the path just in case his "friend" decided to attack me.

All along our hike, he revealed little pieces of himself to me.  Things he had a hand in making, places he liked to have devo's, the best place to hear the creek and his who his favorite speakers are.  The bonfire pit where he and Andy build massive bonfires each week,  and the impact of the testimonies shared there. 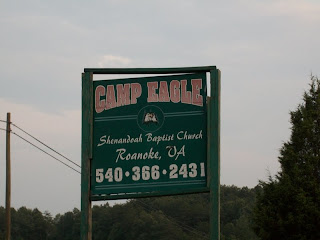 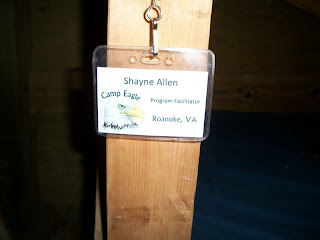 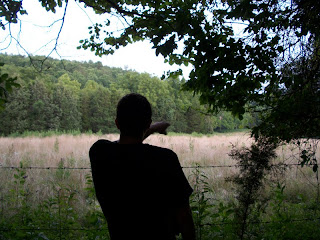 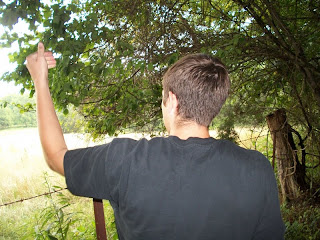 Nearly two hours later, I hugged my baby and said goodbye.  He headed back up the hill, and I headed home,  with my heart beaming full of pride and joy. 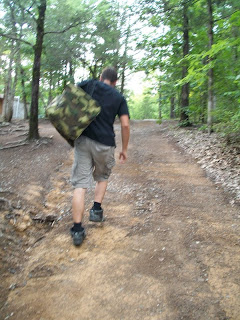 And now, I think I'll take his advice, and check for ticks before calling it a night.