My youngest are just discovering fireflies, which I am enjoying because I have always been a fan.  We call them lightning bugs.  Hours of chasing and catching and setting free.

In all my 40+ years of catching, I never once thought about what I should feed them while being held in captive in the glass jar. 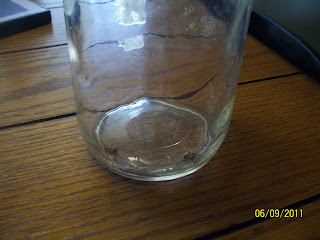 That all changed last night, when my compassionate, sensitive Elijah began to ask harass me about what fireflies eat.  He was truly concerned about them being hungry.  Since this conversation was taking place during our bedtime routine madness, I put him off until this morning.

This morning, the first words out of his mouth were mommy can we look it up now.  Sure! I stalled him with a promise that I would look it up while he got dressed for summer camp.  Google to the rescue.  I was actually surprised when I found a really cool website, which I'll call everything you need to know about lightning bugs.  Who knew they actually eat?

As soon as he learned that the light up bugs eat earthworms, he exclaimed "oh good, I know just where to get those" (ewww, I'm thinking) and he took off out the front door, lightning bugs in tow.  This promptly de-railed my plans to be on time to summer camp this morning.  He found a nice, wiggly and long worm and begged my assistance in adding the worm to the jar.  These bugs were hungry!
I carefully peeled back the handi-wrap so he could drop in the worm without a bug escape.
Success! Lightning bugs and the worm are now safely inside and all of us get into the car.

Now this seemed harmless enough.  I'm feeling pretty good that I have relieved his distress about starving lightning bugs and I continue trying to answer his questions that are being flung at me faster than I can think.

OH, you won't see them eat the worm- I tell him.

About half-way to summer camp, he begins to alert me to his distress.
Mommy, they are eating the worm.

(wasn't that the plan all along?)

Mommy, we have to save the worm.  Get it out!
(uhm, no-- mommy doesn't do worms)
I ask him to pass the jar to me, and as I'm driving glance down so I can assure him they are not really eating the worm.

To my horror, they were!  They were aggressively, openly and very visibly gnawing away at this helpless ugly worm.  The worm who was now trapped by the lightning bugs; he had no where to flee.

This sight was distressing even to me.

As he sat crying in the backseat reminding me how much he loves wormies and telling me how bad he feels for the worm,  I was scrambling for great mom wisdom.