I hopped right on the computer just after seven, and finally took a break about 7:40 to take Isaiah to school.  Because I was sooooo anxious to start work this morning, I decided not to shower-- or put on makeup-- or do my hair. It's dark when Elijah gets on the school bus, so it was a pretty safe decision.  This was my first mistake.

It was supposed to be a quick 15 minute trip to Kingdom Kids-- drop Isaiah off and then home, back to work.

I was distracted, and a bit concerned since my "low tire pressure" light had been on for several days.  The last thing I needed was a flat tire, so I decided to take 5 minutes and stop at Sheetz to put air in my tire. This was my second mistake. 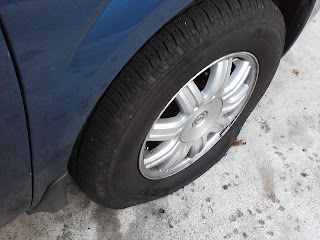 Valve stem broke off and whizzed past my head like a rocket- within seconds ALL the air was gone- COMPLETELY FLAT!
Quickly recovering from the shock of what happened, I went searching for the tiny little piece.  My plan, was to put it back on, refill the tire and be on my way.  I soon realized the idiocrity in that plan, and called Rex instead.  Nothing to do now but sit, and wait.  (This is when I wish I had not taken my Believing God Bible Study out of the car) 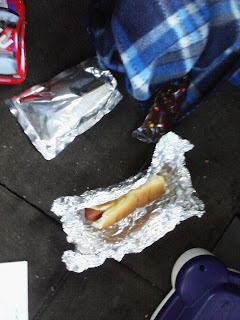 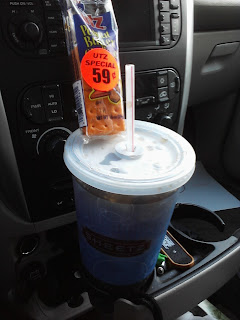 I opted instead for a $.61 cent breakfast--- I do love Sheetz Free Soda cards.
Now, since I am a planner, and I wasn't sure which tire was low, I parked right in front of the air machine- so I could reach any of the four tires without having to move the van.  This also meant, I was completely blocking said "free" air machine from anyone else using it.  I wondered how many people would be irritated with my blockage.
Only three people asked--- "you gettin' air" -- it was fun to get their reactions as I explained the irony in stopping for air to avoid a flat; and instead - getting a flat. 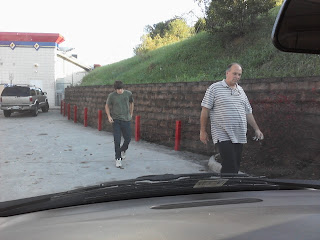 after about forty minutes, my heroes arrive... 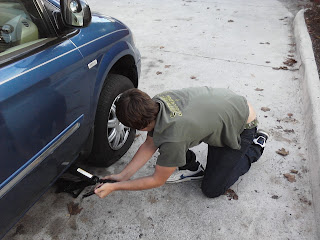 Shayne knew just what to do!


Once the tire was off, I drove it to Merchant's to get the valve replaced.  Rex and Shayne stayed at Sheetz to hold the van in place... silly me stopped on a hill, so the van kept trying to roll off of the jack.

Initially, I was quiet distressed upon being told that due to our vehicle make- I couldn't just replace the stem, the entire sensor would need to be replaced.  Only $79.99.... (insert panic here)  Thankfully, the dude didn't have the right part, so he confessed that it could be repaired with a rubber valve- at no charge.  Only drawback, that silly light that brought me here will remain on, warning me of low tire pressure until... well, until I fork out the $79.99 for the sensor.  I can live with the light. 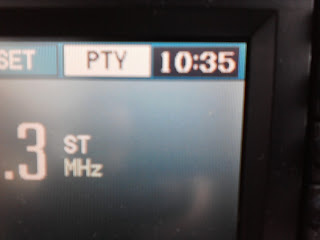 Two and a half hours later, I am finally on my way home.
I thought briefly this morning about wearing my flannel Christmas sleep pants and my T-Shirt to drop Isaiah off.  Really glad I didn't- although there were several people going in and out of Sheetz in said fashion.
This was the first time in months I've left the house without my blackberry.  Won't do that again.
I did get the van cleaned out while I was waiting- that nasty hot dog is merely a memory.
at 9:28 PM