I Didn't Buy THAT.

I was trying to hurry.
So, when the two men in front of me began the argument with the Kroger cashier, I settled in for a wait, and decided not to gripe.

The men, I assumed were homeless, based on what I saw, smelled and heard.
Both were obviously intoxicated.
One was purchasing $177.04 in groceries   snacks.  The card he presented for payment, apparently some sort of public assistance, had a balance of $.05 cents.  He was not happy.  That, was last month's balance, he retorted.
The other was a little OCD about one particular Kroger bag.  I assumed he had already paid for his groceries. He kept moving that bag from the belt, to the end of the rack and back again.
As I was looking down down to arrange my groceries, I noticed his feet.  Shoes, beat up.  One black sock.  One sock less foot.  Legs covered in some sort of bites.  Clothes- smelly.  Hygiene- lacking.
The manager was called over to assist the very young cashier in dealing with the now very aggravated man, who insisted his card should now have $379 because it is in fact the first of the month.
I sighed.
The manager directed them to move over to the courtesy phone to check on the balance, gathered up their groceries and moved the cart to the side.

The cashier rang me up and I proceeded to hurry home.  I needed to do a quick wipe down of the counters and pick up scattered underpants before our friends arrived for dinner.  Steaks.

About a block from my house, I began to wonder what I bought in a pink bottle, that was now sticking out of my bag.  Puzzled, I began to rummage through the grocery bag sitting on the seat next to me, and soon realized,  I didn't buy THAT.

I had that bag, the one he was OCD about.
And no wonder.
It wasn't his newly purchased groceries, but apparently his possessions. 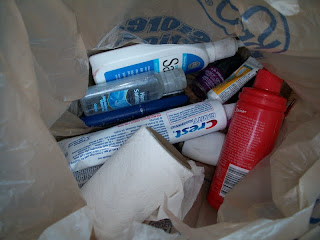 I was in a state of 'ewwww' as I wondered where this stuff might have been.  Upset it was in my car.  Worried about the germs.
And, what do I do now?  By now he would have left the store.  Where do you look for a homeless man to return his stuff?
I was struggling with how to not be grossed out, while I was already feeling bad for him, and worried a bit.  Some of this stuff is expensive, and now he will have to find a way to replace it.
He didn't have the refillable card, he was just accompanying the man who did.
I tried to blow it off.  No big deal, right.  It wasn't my fault the manager put his bag in my cart.  What if he wasn't homeless, what if he was just dirty.  Most people with homes don't carry toilet paper in a Kroger bag, do they?
I kept hearing Jesus say, as you've done to the least of these.  Conviction.  I thought about my own boys, who were homeless for part of their very early lives.
What if the purple nail polish belonged to his own little girl.
The what ifs began to run rampant through my mind.  I realized I have to at least try to get the stuff back to him.
So, I'll call Kroger and tell them I have the "bag" of stuff, should he come back for it.  And if he does, instead of complaining, I'll invest a little bit of time to return it.  Because, while I didn't buy THAT, I walked out of Kroger with a bargain.
A bargain, because this yucky, germ filled bag reminded me once again of all I have to be thankful for.  Including, God protecting  my boys from this being their story.
What do you think you would do?